A few weeks ago, Prabhu had alerted me to a strange controversy over the new two-rupee coin. It seemed too bizarre to blog about: there are weirdos everywhere, and while they cause much amusement, it is best to leave them alone. Well, now reader Annette writes in to inform me that the BJP has taken up the issue, and wants to debate it in parliament. (Parliament runs on taxpayers’ money, I need not remind you.)

And what is the controversy about? Well, in the first article I linked to, a gentleman named V Sundaram pointed out that there is a cross with four dots on the back of the new two-rupee coin that is very similar to one issued by issued by Louis the Pious in the ninth century. See the picture below: 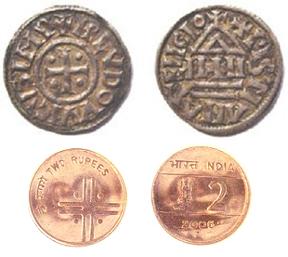 Mr Sundaram claims that this “calculated national mischief” reflects, in the words of a gentleman he approvingly quotes, “the calculated motive of the Italian-led government […] to spread Christianity in India.” He writes:

Ever since the UPA government under the dynastic stranglehold of Sonia Gandhi came to power in New Delhi in May 2004, it has been following a calculated and damnable policy which I have often described times without number as ‘Christianity-Coveting, Islam-embracing and Hindu-Hating in stance, posture, ideology, philosophy, programme and action.’

Now, I’m no fan of the Nehru-Gandhi family, but I’m quite sure that Gandhi has no such “damnable policy” on her mind, “calculated” or otherwise. Indeed, when I first read that piece, I thought that maybe Mr Sundaram was trying a parody, and had gone slightly over the top in the process. Can anyone really think that someone would try to spread Christianity in India through a cross on a coin?

And now we have Vijay Kumar Malhotra of the BJP saying:

It’s the ruling Congress which is pursuing communal agenda in virtually every sphere, from social, political, economic, military to now in national currency.

A communal agenda in national currency? Our nation certainly needs humour, but these gentlemen aren’t comedians, they’re politicians, and they might rule us some day again. They’ll surely issue new two-rupee coins then, and we’ll get confused all over again. Sigh.