The WTF report of the day is about one of the most delightful cons ever. Apparently, this dude named Aijaz Mehboob Khan convinced a bunch of people that he had been a buddy of Mahatma Gandhi and Subhash Chandra Bose and, having thus established his credentials, hoodwinked them of substantial sums of money. The dude is 29 years old, so how did he convince them? By showing them the newspaper report below: 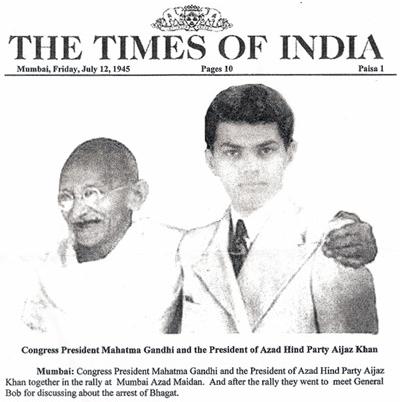 Mumbai: Congress President Mahatma Gandhi and the president of Azad Hind Party Aijaz Khan together in the rally at Mumbai Azad Maidan. And after the rally they went to meet General Bob for discussing about the arrest of Bhagat.

And yes, 10 people fell for this and gave the fellow Rs 50 lakh between them. Life is beautiful.

‘We have come to talk about the arrest of Bhagat,’ barks Aijaz.

General Bob now beams at Gandhiji. ‘You should meet Bahadur,’ he says. ’ He’s the last Mughal.’