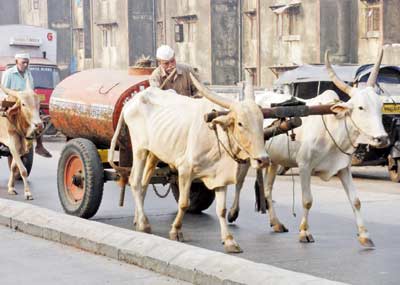 I’m blogging this only because of the delicious irony of Petroleum companies transporting their fuel in bullock carts. I have no comment to make on the animal rights angle here— though it’s not as bizarre as the report about the five killer whales in San Diego who “have been named in a slavery case that argues they should have the same constitutional rights as humans.” I mean, if whales have rights, it could be argued that chickens and cows do as well, and then your food could start suing you posthumously. If PETA ever sues me on behalf of a chicken that I ate the previous night, I will snap produce a legal document with an illegible scrawl on it, and say, “The chicken signed this waiver of its rights before I cooked it. Choke on that.”