It’s long been a grouse of mine that Indian newspapers don’t take the internet seriously. The websites of Indian newspaper sites are poorly designed and badly maintained, disrespecting the reader with clutter, intrusive pop-ups and poor editing. Newspapers should ideally assign one of their top editors to look after their website exclusively, and his or her team should be as good as the main newspaper desk. After all, as time goes by, newspapers are likely to have far more readers online than offline.

Sadly, none of the men who run our newspapers seem to agree with me. See the caption in the screenshot below, for example, from DNA‘s homepage today—do you think something this shoddy would ever appear on their newspaper’s front page? 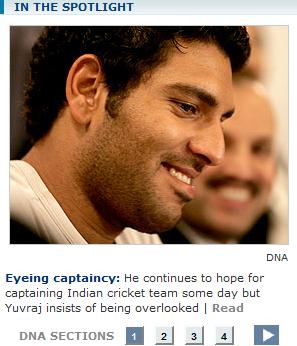