A few moments ago, this is what a section of the ToI homepage looked like: 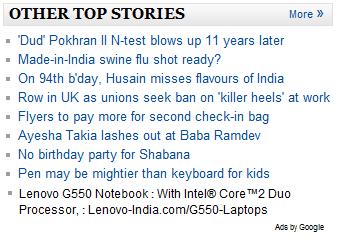 For a moment, I almost thought “Lenovo G550 Notebook” was a ToI headline—sure, it does say “ads by Google” below, but that’s small and you see it later. The font and the bullet point make it seem like it’s just another of the top stories on the site. Such it goes.

And in case you’re wondering what Ayesha Takia has lashed out at Baba Ramdev for, well, the dude apparently said that all actors were “characterless”. Some actors complain about that themselves when they’re not getting any roles, but that’s not what the good Baba meant. Ah, well, whaddya expect?