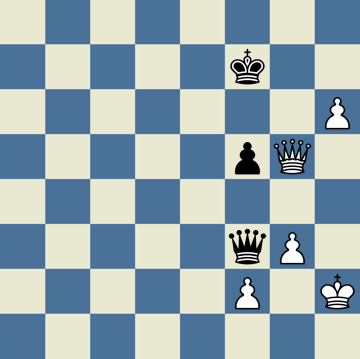 Never, ever tell me that chess is a boring sport. On the last day of March in 2015, two players in Sochi reached the position in the picture above. White to play and win. This is not a problem or a study, because you’d imagine it’s so simple, right? These are two grandmasters playing each other, and 1. Qg7+ wins as black runs out of checks to give for a draw. But before dismissing it as a simple problem, see the context.

It’s the semi-final of the women’s World Championship. White is India’s Harika Dronavalli; black is Ukraine’s Mariya Muzychuk. This is a tie-breaker game being played with each player having 10 minutes + 10 seconds increment, and both players are under time pressure. If Harika wins, she’s pretty much through to the final. She just has to find 1. Qg7+.

With the clock ticking, though, she decides to avoid perpetual check by exchanging queens, and plays 1. Qe3. Muzychuk exchanges, takes the h pawn, and it’s a textbook draw. So near… but there’s still a game to go.

Perhaps rattled by this, Harika fades and falls in the next game, and Mariya is through to the final. She wins, and you can see the emotions in the pictures below: Harika’s desolation; Mariya’s cathartic relief as she is hugged by her sister Anna Muzychuk. Mariya then goes on to win the final, though she loses the title later in a match to Hou Yifan, far and away the best female player in the world.

So why do I remember this now? Because today Harika Dronavalli is once again in the semi-final of the Women’s World Championship, and I couldn’t help but remember her heartbreak of 2015 as I watched her match live.

She’s playing Tan Zhongyi of China. Mariya opted to skip the event, which is in Tehran, because the organisers enforced a compulsary hijab rule for the players. Nazi Paikidze, the US champion, was the first player to boycott the event, and Mariya joined the boycott. (Hou Yifan refrains from playing most of these women’s events anyway because of a) bad structures and b) she’d rather compete with the men in the open section.) But Mariya’s elder sister, Anna, is here, because according to Mariya, she really does want this championship badly. And Anna is playing the other semi-final against Alexandra Kosteniuk.

There’s heartbreak ahead for three of these women. And much, much drama. Are you watching?