This is the 37th installment of Lighthouse, my monthly column for BLink, a supplement of the Hindu Business Line.

The other day I was out at a restaurant with a friend. I thought we would go Dutch. At the end of the meal, the friend insisted on paying the bill. “Damn,” I said jokingly, “had I known I would have ordered dessert.”

Now, in the sense of that specific incident, this is not true because I am on a Keto diet and would not have ordered that dessert no matter what. (Sugar is evil.) Also, as a matter of courtesy, if a friend was paying, I would either order the same as always or even less. But my awkward quip reveals an important truth about us and our money. This was best articulated by the economist Milton Friedman, who once famously laid out the four ways of spending money.

One, you spend your money on yourself. (Example: you go out dining alone.) You will be careful both about the value you get, as well as on about not spending too much. In other words, you will both economize and seek value, and will thus get maximum value-for-money.

Two, you spend your money on someone else. (Example: you buy a proforma wedding present for someone you are not close to.) Here, you don’t care so much for value – as you are not the beneficiary – but you will certainly economize, as it is your money being spent.

Three, you spend someone else’s money on yourself. (Example: You are on a foreign trip for your company at a five-star, all expenses paid for.) You will seek maximum value for yourself, and won’t be so careful about economising, as it is not your money that is being spent.

Four, you spend someone else’s money on someone else. In this case, you will neither economise, for it is not your money spent, nor look for value, as you are not the beneficiary. It is in this fourth instance that the most money is likely to be spent for the least benefit. 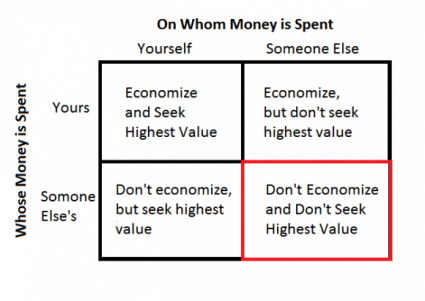 Some of us tend to think of government as this divine body run by angels where all good intentions are transformed into good outcomes. But government is really a collection of human beings, and human beings respond to incentives. Friedman’s Law of Spending, in other words, applies to them. And they are spending someone else’s money on someone else.

Let’s look at an illustration of this: the potholes of Mumbai. Now, there is a department in the local municipality that is supposed to look after our roads, and it does not do so well enough. This is not a consequence of the badness of the individuals involved, but of the system itself. These government employees are tenured and unaccountable. Also, they’re spending someone else’s money on someone else. They are likely to overspend and underdeliver. And indeed, every year our potholes get repaired before the monsoons, and in a few months, the roads are pockmarked again.

This is actually a best-case scenario. To begin with, a government is inefficient by inadvertent design. As time goes by, as a consequence of this design, it becomes dysfunctional by deliberate action. In the case of the roads of Mumbai, it is likely that the government servant involved gets work done by a contractor at a higher price than normal so that he can take a hefty bribe for himself. It is also likely that he makes sure the work is shoddy so that more repairs are required soon, necessitating more bribes for himself. That’s the ecosystem right there.

And indeed, that’s all government. Consider public education, where we spend more and more every year and get worse outcomes than low-cost private schools spending a fraction of what the government does. The real travesty here is that the government not only fails to provide quality education, but it puts up barriers for private players to do so. In truth, private entrepreneurs are far likelier to provide good services because their incentives are better. Their survival and their profits depend upon their providing value. Not so in government.

Government is India is bad at two levels. Level one, it spends other people’s money on other people, which is a hopelessly inefficient structure to begin with. Level two, it has become an instrument for individuals to prey on citizens in a parasitic way, making money not by providing value but by robbing others of value. The government is not much more than a legalized mafia, extorting hafta, and yet we behave as if those who avoid paying hafta are the ones in the wrong. Isn’t that perverse?

The great Frédéric Bastiat once said: “Government is the great fiction through which everybody endeavors to live at the expense of everybody else.” It’s a great game. Even if we cannot win this game, we should at least see it for what it is.